Candidates for a Physics Ph.D. program are often graduates of previous degree programs in mathematics and science that offered a sufficient foundation of knowledge. Condensed matter physics, atomic physics, molecular physics, optical physics, geophysics, biophysics, high energy/particle physics, and astrophysics are some of the specialties available in physics Ph.D. programs. 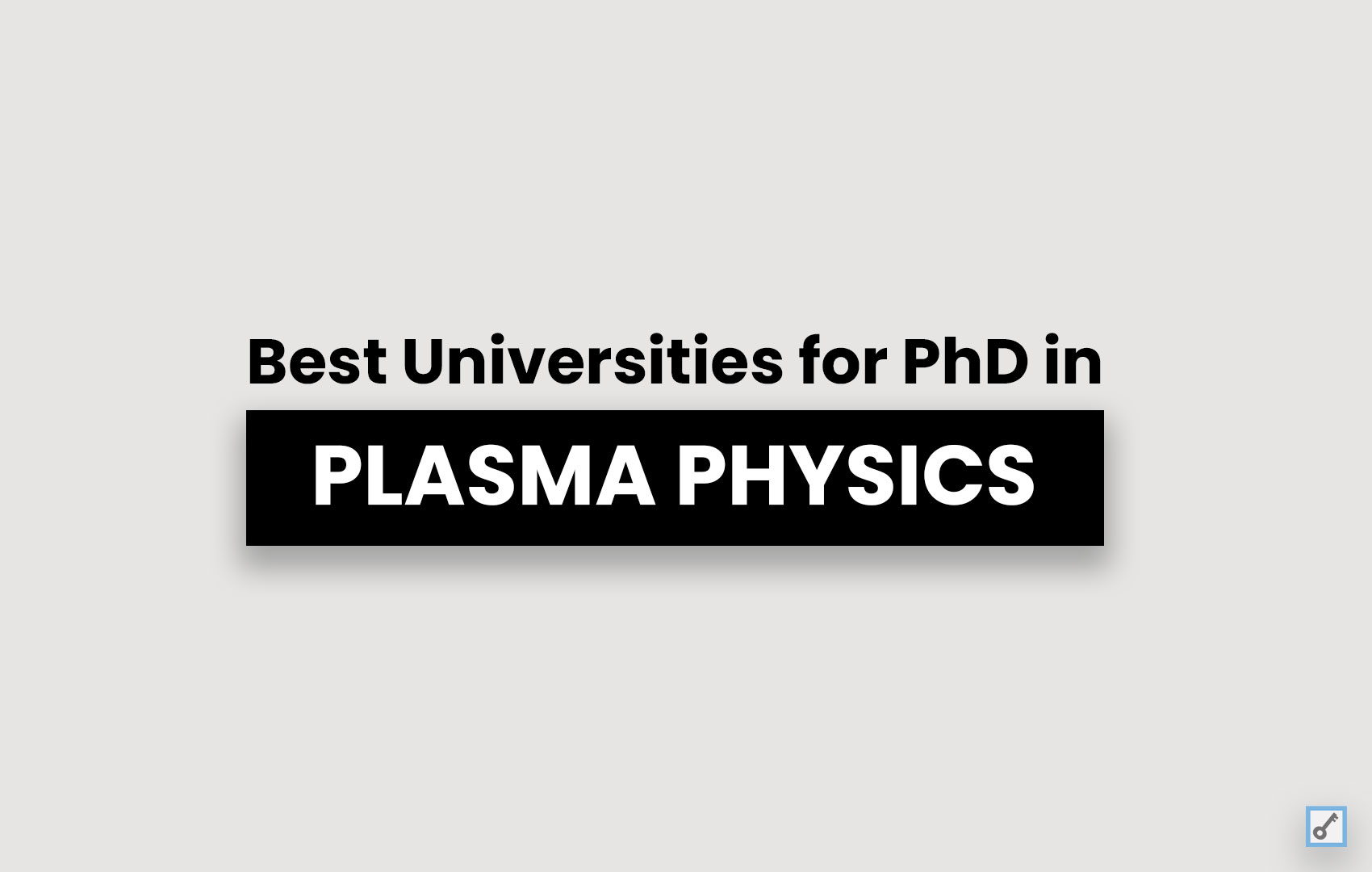 Engineering, product development, consulting, teaching, and other fields might benefit from the theoretical training and abilities learned in a Physics PhD program.

Although applied physics is the field of study that is designed for practical application, all Physics PhD topics are regarded as valuable contributions to our understanding of the world. A Physics PhD candidate’s obligations and expectations may include assisting with other existing research projects, publications, and teaching undergraduate courses, in addition to the dissertation.

Find out more about pursuing a PhD in Physics at one of the recognized universities listed below!

The arrival of Professor Joseph Henry, a natural philosopher, in 1832 marked the beginning of the Department of Physics at Princeton. Under the guidance of Milton G. White, the program extended into nuclear physics research in the 1930s, at which point the university established a cyclotron in the Palmer Laboratory.

The Nobel Prize has been granted to over a dozen Princeton faculty members and students. These distinguished persons were involved in or credited with the discovery of electron diffraction by crystals, the discovery of a novel type of quantum fluid with fractionally charged excitations, and electron scattering discoveries connected to nucleon structure.

Among Princeton’s many options is a medical physics program. It also collaborates on research with other departments of the university, such as astrophysical sciences, mathematics, and molecular biology. The Institute for Advanced Study, PRISM, PPPL, and the Lewis-Sigler Institute for Integrative Genomics are also collaborators with the institution.

2. The University of Cambridge – Cambridge, England

Theoretical and mathematical physics was studied at Cambridge by 1642. The Cavendish Laboratory was originally launched in 1874, promoting the school’s first applied physics studies with some of the greatest physics programs available at the time.

Ernest Rutherford, the pioneer of nuclear physics, and Niels Bohr, who researched the structure and function of the atom, were both contributors to Cambridge’s Department of Physics in the past.

Cambridge professors and students are also responsible for the discovery of the neutron, the first atom-splitting, and the discovery of antimatter. The university is home to a total of 20 Nobel Prize winners in Physics.

Many people consider MIT to be the best science school in the world. Because of its proximity to other prestigious universities such as Harvard, MIT has numerous options for joint study.

Students have been investigating the area of physics through hands-on learning experiences since the school’s establishment in 1861. Since 1990, MIT’s Department of Physics has produced four Nobel Prize winners and seven Oersted Medal winners, making it one of the strongest undergraduate physics programs in the country.

Through its Summer Research Program and Physics Bridge Program, the physics department is proud of its outreach efforts to underrepresented minorities and first-generation college students.

Learners who take part in these programs are more likely to be accepted into the school’s graduate physics programs. The physics department at MIT collaborates with 16 affiliated labs and centres, including The Haystack Radio Observatory, The Gravitational-Wave Observatory’s Laser Interferometer, The Kavli Institute for Astrophysics and Space Research, The Electronics Research Laboratory, The Plasma Science and Fusion Center

In June 1897, Kyoto University was established. The school’s Department of Physics was established a year later. Condensed matter, particle physics, nuclear physics, and astrophysics are the four study groups that the department concentrates on.

The Data Analysis Center for Geomagnetism and Space Magnetism and the Institute for Geothermal Sciences are two research centres on campus at Kyoto.

The Hida Observatory and the Kwasan Observatory are two of the school’s observatories. Solar physics, cosmic plasma physics, and stellar physics are the emphasis of both facilities.

Since 1642, Harvard University’s Department of Physics has provided some of the greatest undergraduate physics programs in the world.

The Jefferson Laboratory, the United States’ oldest physics lab, is also located at Harvard. Members of the department have been honoured for their contributions to high-pressure physics, the discovery of the separated oscillatory fields approach, and the development of new nuclear magnetic precision measuring methods. The department has a total of ten Nobel Prize winners.

6. The University of Oxford, Oxford, England

The Mathematical, Physical, and Life Sciences Division at Oxford houses the Department of Physics, which offers a number of physics master’s programs.

The physics department at Oxford is one of the largest in the world, with more than 100 research groups and facilities. Oxford has produced five Nobel Laureates who studied or worked there.

Imperial College London’s Department of Physics has been around for almost a century. Optics and photonics, quantum fields and basic forces, plastic electronic materials, physics with nanophotonic, and quantum engineering are among the eight domains in which graduate students can obtain a master’s degree.

The university’s physics department, which is one of the largest in the UK, has lately organized its key study topics into four main topics: fundamental physics, photon science, condensed matter physics, and space, plasma, and climate.

Eight Nobel laureates have been students or faculty members of the Department of Physics at ETH Zürich, including Heinrich Rohrer, Felix Bloch, and Albert Einstein. The first chair of the institute’s physics department was Rudolf Clausius, who is well known for his formulation of the second law of thermodynamics.

The department conducts research in a wide variety of topics within the field, including novel technologies, computational sciences, and supercomputing, and has some of the strongest physics programs in the country.

9. The University of Tokyo, Tokyo, Japan

Kenjiro Yamakawa was the first Japanese professor at the University of Tokyo’s Department of Physics, and he received his doctorate in 1888, making him the first member of the physics faculty to do so.

Masatoshi Koshiba, a professor at the institution, won the Nobel Prize for Physics in 2002 for utilizing the Kamiokande detector to discover the first neutrinos from a supernova.

The Institute for Cosmic Ray Research, the Japan Aerospace Exploration Agency, and the National Astronomical Observatory of Japan sponsor UTokyo’s physics department, which focuses mostly on astrophysics. In addition, the physics department of the institution was the birthplace of biophysics research in Japan.

TUM’s Physics Department is still one of Germany’s largest and most prestigious. Biophysics, nanotechnology, novel materials, cosmology, condensed matter physics, and nuclear physics are among the faculty’s specialities.

Erwin Neher, Wolfgang Ketterle, Klaus von Klitzing, and Johann Deisenhofer are among the Nobel laureates who have worked in the department. In addition to Nobel Prizes, the department’s scientists have received four Leibniz prizes and 17 European Research Council grants.

Dark matter, the physics of synthetic biological systems, neutron scattering, functional materials, and biomedical physics are among the topics studied by the department’s research groups.

Scholars and scientists from all over the world visit the school’s four research facilities, which include a nanotechnology and materials centre and the Heinz Maier-Leibnitz Research Neutron Source.

The Physics Department at Stanford was one of the first to start after the institution was founded in 1891.

Felix Bloch, a Swiss physicist, started working at Stanford in 1934. He carried his electron transport and ferromagnetism theories, as well as the Bethe-Bloch equation and the finding of spin waves and Bloch walls, with him. Stanford researchers recently assisted in the tracking and analysis of the strongest gamma-ray burst ever observed.

The graduate program Department of Physics at Columbia was initially established in 1892 and can claim affiliation with 29 physics Nobel laureates, making it one of the strongest physics programs accessible.

Michael Pupin, a pioneer in the fields of X-rays and electromagnetism, was significant in establishing the department. The American Physical Society can also be traced back to a meeting held at Columbia in 1899.

The Center for Electron Transport in Molecular Nanostructures, the Institute for Strings, Cosmology, and Astroparticle Physics, and the Environmental Molecular Science Institute are only a few of the research centres and institutions on campus.

The Astronomy Department, the Electrical Engineering Department, and the Mathematics Department are all affiliated with Columbia’s physics department.

Caltech has an unusually tiny endowment for a world-class research institute, with enough finances for spectacular facilities and famous instructors, as well as small class numbers.

Students and instructors in the school’s physics graduate programs frequently collaborate with academics and students studying other sciences such as planetary science, chemistry, and engineering.

Top 10 Universities for Physics – Physics Schools in the World