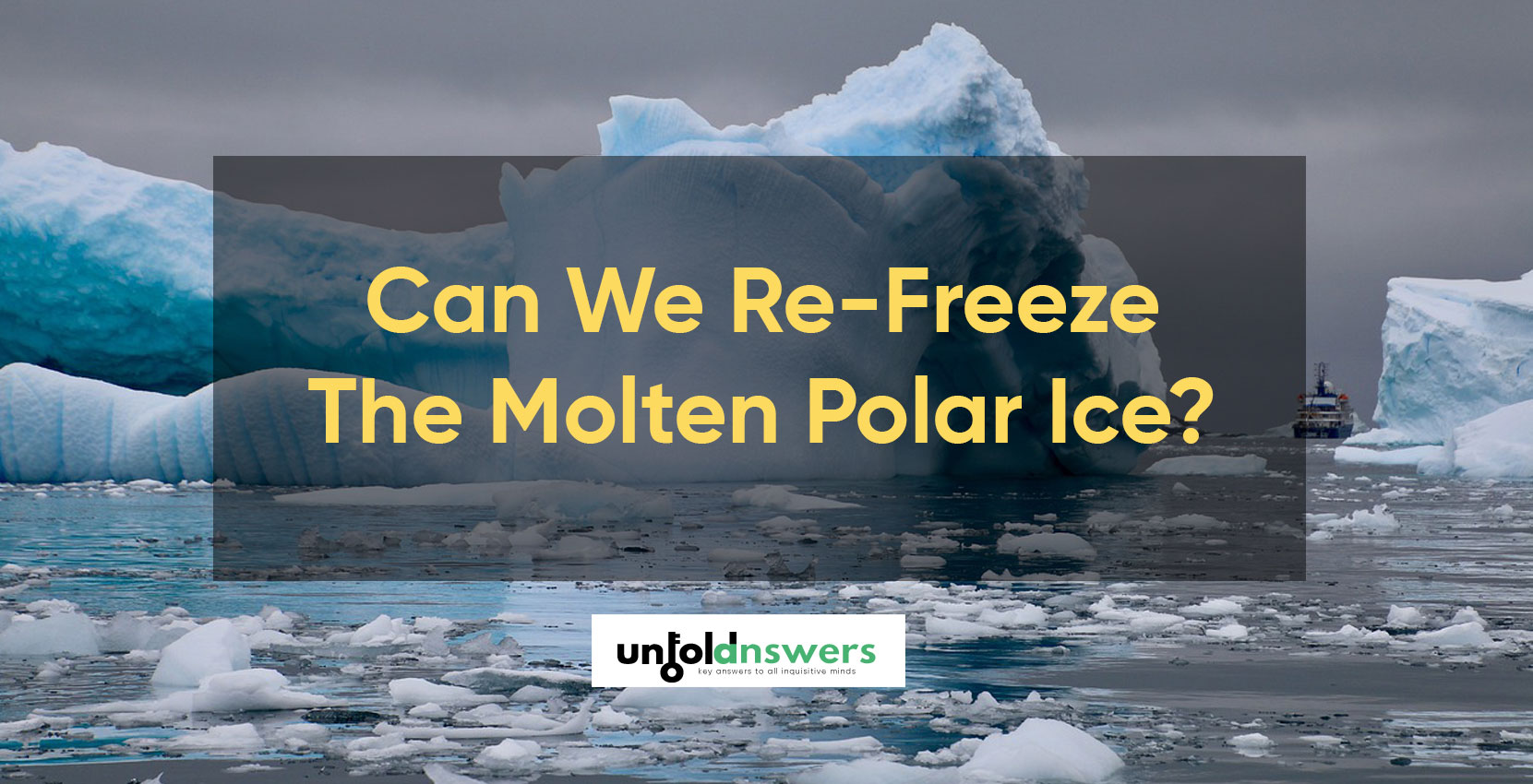 The worst-case can be climate extremities leaving entire Earth inhabitable. So, global concerns have risen to minimize the rate of this melting process. Re – freezing the melted ice can be a major step that can save us but, is it possible?

The temperature of ocean water connected to the icebergs and the glaciers plays the most significant role in releasing the heat to the ice for melting. Another factor is the warmer wind that passes over the icy surfaces.

All these causes, at last, converge to an only cause, global warming. Global warming is accounted by the overproduction of greenhouse gases such as carbon dioxide, methane, chlorofluorocarbon, hydrofluorocarbon, nitrous oxide, etc. These gases absorb the heat radiation, making the Earth warmer. As the Earth gets warmer, polar ice melt is accelerated.

Also, the ice can reflect the sunlight so that it is responsible for the regulation of temperature of the Earth. The melting of ice can result in an abrupt rise in global temperature.

The rise in global temperature and change in climatic condition can result in different weather extremities which can bring about a huge loss of life. Worst of all, it might make Earth inhabitable one day. So, we must think of protecting the polar ice.

Water can be frozen to ice. So with advancement in technology, a question arises – can we re – freeze the melted polar ice? But freezing such huge mass of water is something challenging and close to impossible. It takes something extraordinary to freeze an entire ocean or some portion of it since an ocean is not isolated (heat can easily transfer to and from the surrounding) system.

Water can be pumped over the polar ice sheets to thicken the ice sheets. The thickening of the ice sheet can introduce simple refreezing procedure. But this process is not as simple as it sounds. The energy required to pump water is considerably large.

Researchers have proposed wind – driven water pumps so that this procedure can be more efficient. This can reduce the power consumption but still, the heat that is released during freezing of that mass of water is large and can have strong impact.

A gram of water at zero degrees releases 80 calories of energy during freezing. We are not talking about freezing some kilograms of water but tonnes of water. So, the energy released is tremendous. This heat energy released can affect the global temperature.

Also, the freezing mechanism requires a lot of energy. The most efficient of today’s refrigerator uses one-third of the energy that is released in order to freeze water. This is for an isolated system but for an open system like the arctic or antarctic, the energy loss increases the amount of energy required for refrigeration.

We can say that refrigeration is a costly process as it requires ample amount of energy. However, the management of the heat released during freezing to operate the freezing machines may minimize the energy required.

A part from the refrigeration, we can block the sunlight so that the temperature above the poles will get lowered and the freezing progresses naturally. For blocking the solar radiation we can develop environment-friendly reflectors. This happens around volcano when it erupts. The smoke blocks the solar radiation and the area cools down.

Even cloud seeding won’t be much effective since it requires an enormous amount of water vapour for making clouds which can block millions of square miles of area. So, efficient reflection can be achieved in order to reverse polar ice melt by the development of environment-friendly reflectors.

Polar ice melt is difficult to reverse but not impossible if we try. I personally choose to reflect the solar radiation by use of aerosols. This process can be efficient than the other two.

Although the above methods are convincing, the best way to reverse polar ice melt is reduction of greenhouse gases present in the atmosphere. Machines that suck atmospheric carbon has been developed. But it is our individual effort that matters. We have to depend on clean energy and minimize the production of greenhouse gases. A small effort made by us can protect our home.