What Are Fluorescent Minerals?

When some minerals are directly exposed to a particular kind of radiation (ultraviolet radiation, X-rays or electrical discharge), they begin to glow i.e. they produce visible light. 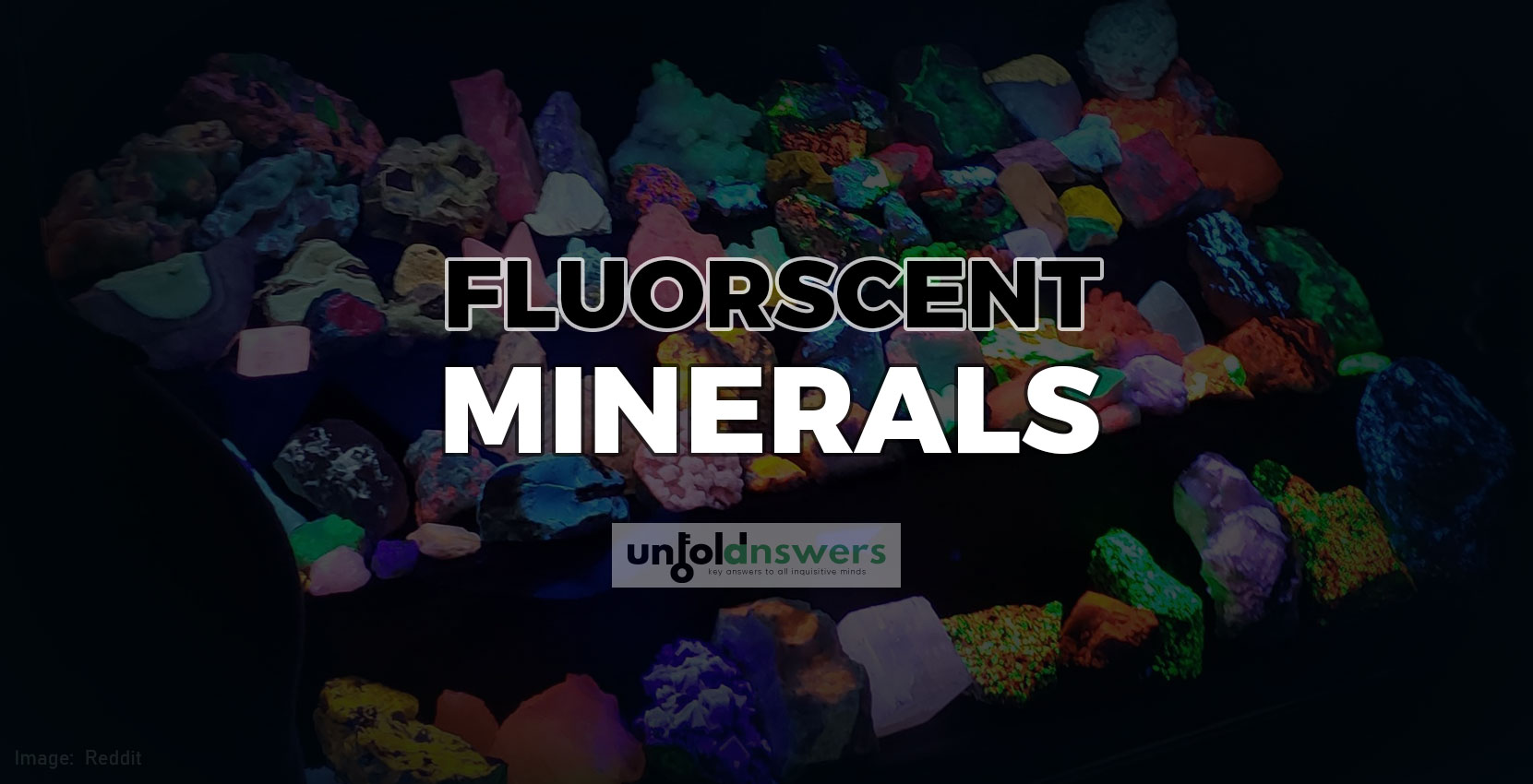 One of the most common minerals exhibiting fluorescence and certainly the best example of a fluorescent mineral is fluorite (CaF2), after which the entire phenomenon is named.

Fluorescence is one of the important optical properties of minerals, which is the response of minerals to incident radiation (mostly UV). Minerals are characterized by the internal arrangement of atoms in their crystal lattices. Thus, the fluorescent mineral is characterized by a specific kind of atom (called activator element) in their crystal lattices which gets excited to a higher energy state when the minerals are subjected to UV rays or X-rays, or electron beams.

When these atoms get back to their original energy state, the excess energy is released in the form of visible light making the minerals glow. Some of the frequent activator elements or impurities are Manganese (Mn), Zinc (Zn), Tungsten (W), Molybdenum (Mo), Chromium (Cr), and some rare earth elements (REEs).

Less often, the presence of organic impurities also causes fluorescence. As activator elements are the key to fluorescence, pure minerals are very unlikely to fluoresce. Also, any given mineral may not always fluoresce with the same intensity or the same color.

The color and the intensity of fluorescence produced by a mineral depend on the internal arrangement of its atoms and the type of radiation it is placed under. The same mineral may produce different colors during fluorescence if the incident radiation has a different wavelength.

Fluorescence is not to be confused with phosphorescence in which the minerals produce visible light after the removal of the source of radiation. It is to be noted that fluorescence stops once the source of emission is removed.

Fluorite is a mineral included in the halide group, whose members arrange their atoms in an isometric (cubic) system. Pure Fluorite is colorless, but its impurities might let it fluoresce in a diverse array of colors from yellow and green to bluish-black and brown.

Under ultraviolet radiation, fluorite generally glows in blue. Its fluorescence is due to the replacement of some of its calcium atoms with rare earth elements.

Calcite is a carbonate mineral and its atoms are organized in a hexagonal (rhombohedral) crystal system. Like fluorite, pure calcite is colorless. Impure calcite may exhibit colors like green, blue, yellow, violet, etc. Calcite mostly fluoresces in red, yellow, or pink, its fluorescence is the result of the presence of Manganese (Mn) atoms in its crystal lattice.

Willemite belongs to the silicate group of minerals and has a hexagonal crystal system. It may be black, yellow, green, greenish-yellow, or white in color. It may fluoresce in green or yellow under UV rays due to the partial substitution of Zinc (Zn) atoms by Manganese.

Scheelite is a member of the tungstate and molybdate group and its crystal system is tetragonal. The specimens of scheelite may be white, yellowish-white, pale yellow, brownish, or greenish in color. When exposed to UV radiation, scheelite glows in white or bluish-white color due to the substitution of Tungsten (W) for Molybdenum (Mo).

Corundum is an oxide mineral whose atoms are placed in the framework of a hexagonal crystal system. The varieties of corundum include the popular gemstones ruby and sapphire which is usually red and blue in color and also can be found in yellow, purple, and green. Some varieties of corundum may fluoresce. For instance: ruby emits red fluorescence with exposure to UV rays due to the presence of chromium atoms.

Apatite series are examples of phosphates and are present in a hexagonal crystal system. They may be white, blue, orange, brown, or greenish-yellow in color. They fluoresce in UV light to produce dark yellow or violet color due to the presence of impurities like Manganese.

Halite is an important mineral in the halide group. Its crystal system is isometric and colorless. Some specimens of halite are fluorescent due to impurities like Zinc and Manganese in their atomic arrangement.

Wollastonite is a silicate and has a triclinic crystal system. It mostly exists as a white mineral. It is fluorescent due to the presence of Manganese (Mn) in solid solution. During fluorescence, it glows in green color.

The scapolite group consists of silicates like meionite and marialite, which have a tetragonal crystal system. The minerals may be white, pink, grey, blue, etc. in color. The minerals in this group produce yellow or orange color when kept under UV light.

Autunite is phosphate and lies in the autunite group of minerals, which includes 13 different minerals. Autunite crystals have an orthorhombic crystal system. They are strongly fluorescent under UV radiation and glow in yellowish-green.

Barite is an anhydrous sulfate with an orthorhombic crystal system. It is usually colorless or white but may also be present as a blue, grey, red, or yellow mineral. It is fluorescent due to the impurities existing within its crystals.

Titanite, a silicate, has monoclinic crystals. It is brown, yellow, or green in color. It produces fluorescence due to the substitution of the Calcium in its molecules by rare earth elements.

With peoples’ fascination for fluorescent minerals, many of these minerals are a collector’s dream.