Force makes things possible. Behind every phenomenon, there is a force and according to modern science, there are four unique forces which makes everything in the Universe possible. But, different anomalies in experiments and incomprehensible things present in the Universe suggests there might be room for a fifth force or maybe more. 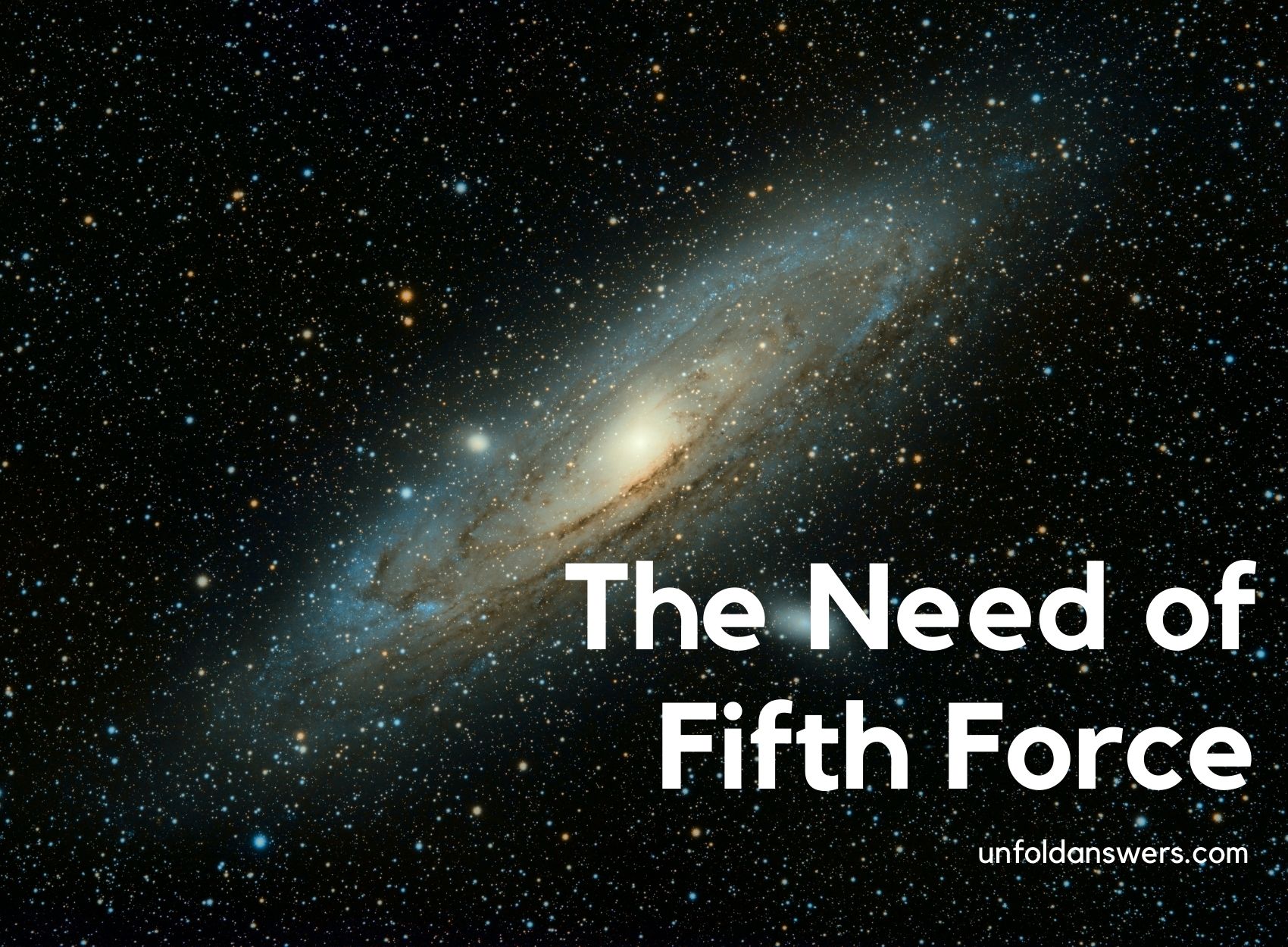 The Need of Fifth Force in Modern Science

Our knowledge is evolving. We are discerning the truths one by one. But, we’ll never hit the rock bottom in this abyss of knowledge. There is more, always there is. When it comes to scrutinizing the cosmos, the former sentence becomes much eminent than ever. The universe is vast and till now we have encountered numerous things that cannot be explained on the basis of our preexisting knowledge. So, there might be a fifth force that we have not realized yet.

The need for a fifth force can be better understood if we know the origin of the other four fundamental forces. At least, what made people realize the existence of such forces can lead us to the inevitable need of the next fundamental force.

Four fundamental forces: gravitational force, electromagnetic force, strong force and the weak force, all came to our realization in order to suffice their utter need. The simplest of these forces, gravity, was realized from the observation of attraction of objects towards Earth as well as the attraction between planets and Sun.

Meanwhile, the electromagnetic force was evident in the attraction and repulsion observed between charges and magnets. Though the picture of these forces became more vivid in time being and they were not one instant revelation, they originated from observation of attractive and repulsive phenomena stated above.

A however strong force and weak force are short-ranged force present in the sub-atomic realm, thus they were not evident as electromagnetic and gravitational force. The stability of the nucleus despite the presence of repulsive positive charges led scientists to the strong force. Finally, the spontaneous decay mechanism of some atomic nuclei insinuated the need for a new kind of force, the weak force.

Hence, making observations on the previous known force, it is certain that whenever a mechanism like the attraction of gravitational force or electromagnetic force is seen, a new force might be on the horizon. Also, an anomaly in the observations like the stability of the repulsive proton-rich nucleus, the decay of stable atomic nuclei can hint the presence of a new kind of interaction. Have such alien phenomena been encountered? Yes, plentiful have been encountered till date and many have already been discarded.

What Demands the Need of Fifth Force?

Various anomalies have been seen in different measurements but there are two anomalies which demand the need of fifth force clearly. The first one is an anomaly in the masses of the galaxy. According to it the observed mass and calculated mass of galaxies do not match. This led scientists to assume the masses which cannot be observed as dark matter. Also, the expansion of the Universe is accelerating signifying the presence of unknown energy, the dark energy.

If dark energy and dark matter are detected, there must be associated with interaction and force which cannot be observed with ordinary electromagnetic waves. This force can then be termed as the fifth force. Since the existence of dark matter and dark energy are backed by general relativity, the need for such force is crystal clear.

Not just in the world which cannot be observed, there is the existence of such discrepancy in the observable sub-atomic world too. Researchers at Hungarian institute ATOMKI found that 8- Beryllium produces electron-positron pair with energy which cannot be accounted for by the known forces. This led them to make an assumption of a completely new kind of particle called X17 particle and interaction, the fifth force. This exact discrepancy has also been reported in Helium-4 by the same group here. However, the attempts to prove the presence of such a hypothetical particle and force by many researchers have failed.

But, the story of this anomaly does not end here. Theoretical analysis presented by scientists bolsters this idea of a new force and its carrier. They described in a paper published online that the particle used to explain Be-8 anomaly can explain He-4 anomaly within the experimental uncertainty. So, this need for the fifth force is vivid.

Further on, there are other anomalies which cannot be explained by the standard model like the discrepancy in the size of the proton, cosmic inflation, odd transition in positronium, etc. So, one thing is certain, the four forces are not sufficient to explain the Universe.

Present science shows the insufficiency of the standard model and the four fundamental forces explicitly. We need more concrete information about these discrepancies and eventually, they will be explained explicitly in the time being with the birth of new theories. And finally, when we discover the fifth force, there might be room for more. Our knowledge is evolving and yes, we are marching towards the ultimate truth whatsoever.