Top 10 Universities for Physics – Physics Schools in the World

It isn’t a matter of doubt that physics covers a special spot in the list of sciences. When the Nobel Prizes are awarded, the place for Physics comes before the others which notifies this subject’s role as a foundation of science. 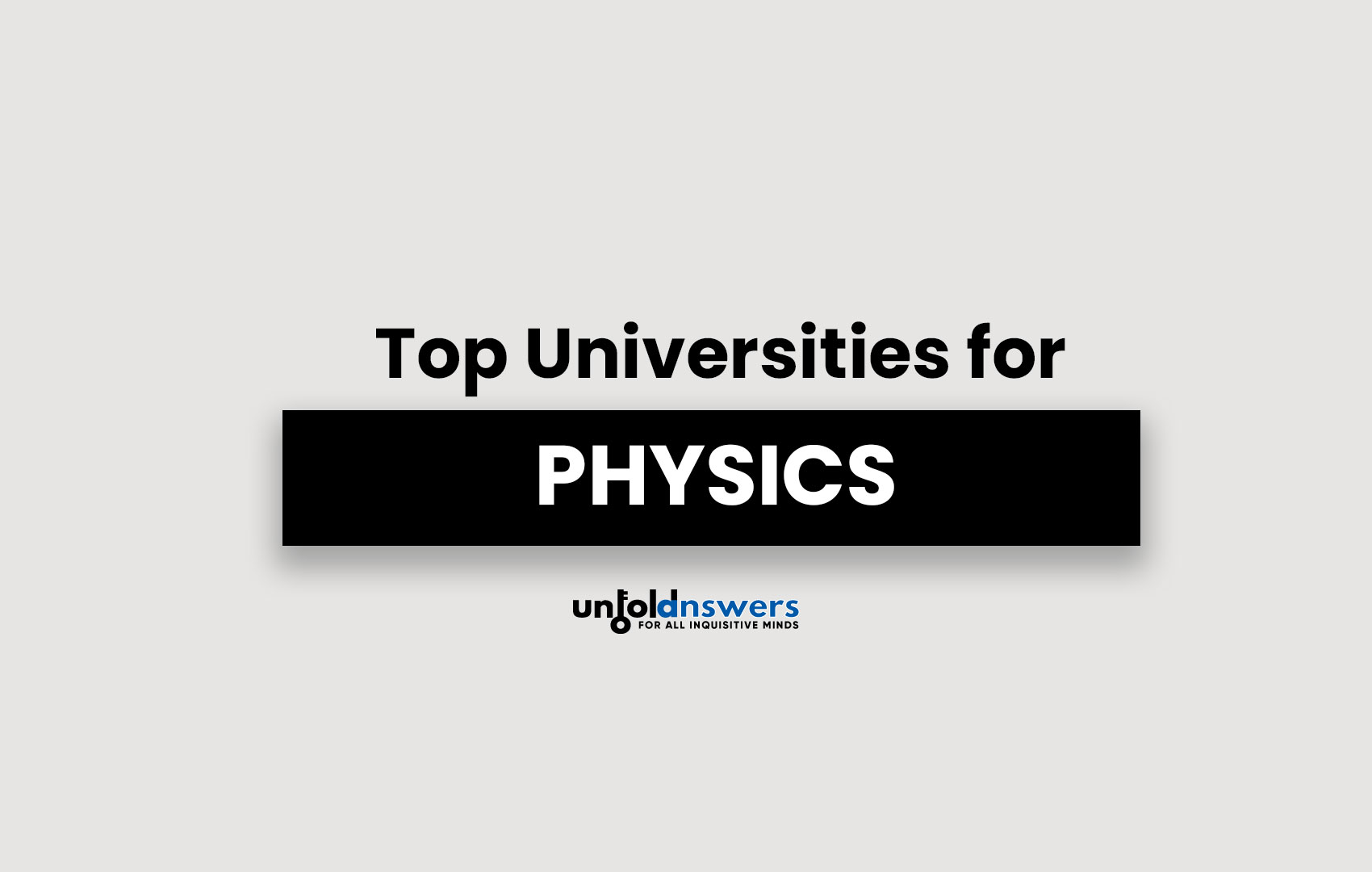 If you’re among those who find Physics more than just interesting and want to pursue education in this subject, read on to know about some impressive colleges providing degrees related to Physics.

MIT has been considered among the world’s best science schools by many. It is situated close to other exceptional universities like Harvard, because of which MIT conducts several collaborative types of research. Students here have been traversing active learning experiences ever since the school was founded in 1861.

Since 1642, the Department of Physics at Harvard has provided some of the best undergraduate programs for physics. The Jefferson Laboratory is also conducted by Harvard which is known for being the oldest physics lab in the United States.

Members of this department are recognized for receiving awards for their works in several inventions, high-pressure physics, and for developing new methods for precision in nuclear magnetism. Overall, the department has had ten recipients of the Nobel Prize.

Cambridge made the study of mathematical and theoretical physics available by 1642. The Cavendish Laboratory was established in 1874 which encouraged the school’s first studies of applied physics along with various of the best physics programs accessible at that time.

The Department of Physics in Cambridge has Ernest Rutherford as its previous contributor, he’s known for being the father of nuclear physics, there was also Niels Bohr, who worked on the structure and function of the atom. Cambridge professors and students are also credited to have discovered the neutron, the antimatter, and the first splitting of the atom.

This university has overall a total of 20 Nobel Prize recipients in Physics. There are many continuing research programs in Cambridge physics departments, such as for the scientific computing collaboration, sustainability physics, and the physics of medicine.

The Physics Department in Stanford University was amongst the initial parts to open after the university was founded in 1891. Felix Bloch, the Swiss physicist started work at Stanford in 1934.

He introduced the theory of ferromagnetism and electron transport, his discovery of Bloch walls and spin waves, the Bethe-Bloch equation. Stanford physicists had a key role in analyzing and monitoring the brightest gamma-ray burst ever studied.

The College of Science and Letters is managed by the Department of Physics in Berkeley. The Physics Department in Berkeley has contributed to around one-third of the Nobel Prize recipients, among these receivers are nine permanent faculty members and seven alumni.

The several gains of past and present department members involve the creation of the bubble chamber, the cyclotron, and the detection of the accelerating augmentation of the universe.

The Department of Physics in Oxford delivers an array of master’s programs in Physics such as Mathematics, Life, and Physical Sciences Division. Known for being among the largest departments of Physics in the world, Oxford’s physics departments feature over 100 research facilities and groups, such as The Climate Dynamics Group, The Accretion and Jet Physics Group, The MARS Project, and so on.

For a top-notch research institute, this can seem incredibly small. Caltech has a $ 2.5 billion foundation fund with ample funding for awesome labs and outstanding teachers combined with small class sizes.

This widens to the school’s physics department, which is housed in Caltech’s mathematics, physics, and astronomy department. The Institute for Quantum and Matter is involved along with the Center for Theoretical Cosmology and Theoretical Physics in the department’s research institutes and centres.

The history of the Princeton Department of Physics goes back to 1832 when Professor Joseph Henry, an expert in natural philosophy, arrived. In the 1930s, the program lengthened to include research in nuclear physics under the direction of Milton G. White, after which the university formed a cyclotron in its Palmer laboratory.

More than a dozen Princeton professors and students have received the Nobel Prize award. These distinguished individuals have been credited with the discovery of a new kind of quantum fluid, discovering electron diffraction by crystals, and findings related to the structure of nucleons by electron scattering.

The Physics Department at Imperial College London has existed for more than a century. Several award-winning faculty and students, including Fellows of the Royal Society, Nobel Prize winners, and plenty others are housed in this department. At present, programs for both undergraduate and graduate-level are offered here.

Graduate students have eight areas from which they can choose one to receive their master of science degree. They can choose from options such as quantum fields and fundamental forces, physics with nanophotonics, quantum engineering, plastic electronic materials, and optics and photonics.

Students that are full-time graduates finish their coursework in a year, while part-time students can take a two-year span to get done with the same coursework. There are also 13 PhD programs in Physics offered by the school that traverse around areas such as high energy physics, condensed matter theory, theoretical physics, and astrophysics.

Offering some of the best physics programs available, the Columbia Department of Physics graduate program was officially established in 1892 and boasts of being associated with 29 Nobel laureates in physics.

Michael Pupin, was recognized because of his work in the section of electromagnetism and X-rays, he was a key figure in the growth of the department. Furthermore, the American Physical Society has its roots in a meeting in Columbia in 1899.