The sixth planet from the sun and the second-largest planet in our solar system, Saturn, or “the ringed planet”, has a wide array of unique and intriguing features.

Composed of mostly Hydrogen and Helium, the volume of Saturn is 755 times greater than that of Earth and it is the only planet with a density lower than the density of water. Yes, it can float on water. 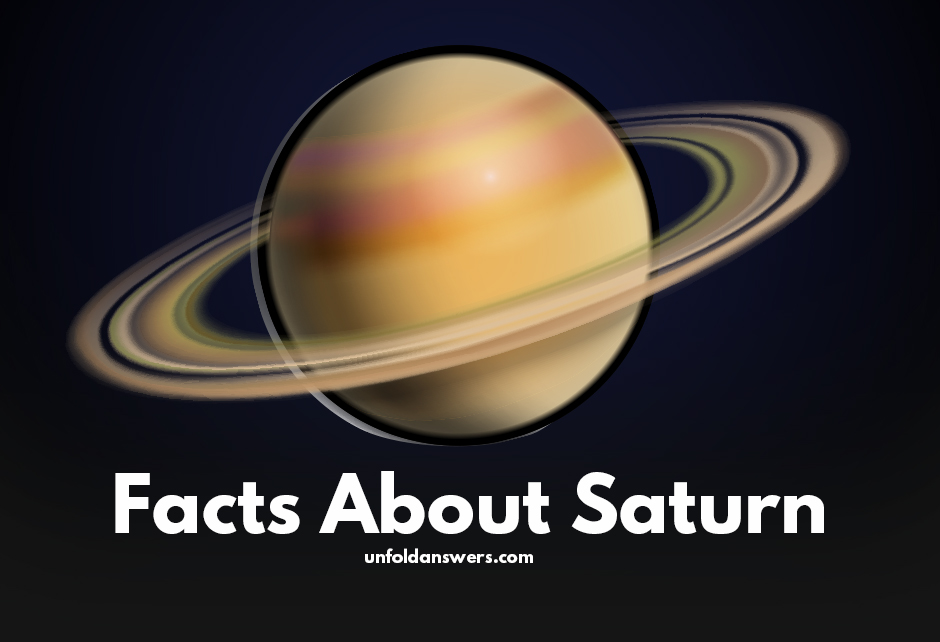 Saturn is considered by many to be one of the most beautiful and dazzling planets specifically because of its prominent feature- the intricate and extensive rings that are made up of ice, dust, and rock.

The Discovery of Saturn

Visible to our unaided eye, Saturn has been known to us since ancient times. The first recorded observation of Saturn was in the year 1610 by Galileo Galilei. This telescopic observation was groundbreaking however due to the use of a crude instrument Galileo wasn’t able to deduce the rings correctly and he misunderstood them to be its moon or even considered it to be Saturn’s arms.

Decades later in 1959, the mystery was solved by Christiaan Huygens, a Dutch astronomer. Not only did he discover the ring system but he, also, discovered Saturn’s biggest moon – Titan, with the help of an improved and modern telescope. Another major discovery of Saturn was its other four primary moons namely the Iapetus, Rhea, Tethys, and Dione by an Italian Astronomer named Jean- Dominique Cassini.

He was, also, able to find the gap that splits the ring system into two divisions thus, the gap is known as the ‘Cassini division’.

1. Saturn Can be Seen By our Naked Eyes

As fascinating as it may sound, Saturn is one of the five planets which can be visible through our naked eyes. It is, also, the fifth brightest planet in our solar system. If you look at the sky at night, it’s not as difficult as one might think spotting Saturn would be. However, if you want an intricate look at the planet and its ring system, you’ll require a proper telescope.

2. Saturn is the Least Dense Planet

Saturn has the lowest density out of all the planets in our solar system. In fact, it has a lower density than water. Its density is 0.678 g/cm3 whereas, water has a density of 1 g/cm3. This means that if you ever put Saturn on the water it would actually float.

Saturn is a massive ball made out of gas mostly Hydrogen and Helium, meaning you wouldn’t even be able to stand in Saturn. These swirling gases present in its atmosphere get denser the further you get, eventually turning hydrogen into metallic. A hot interior composed of rocky materials which surround metals such as iron and nickel and other solidified materials is present at its core.

4. Saturn was named after the Roman God of Farming

Saturn was named after the Roman God of farming who was also the father of God Jupiter, according to Greek mythology. This makes sense since the planets Saturn and Jupiter are quite similar in composition and size.

According to NASA, Saturn has the second-shortest day in the entire solar system. A day in Saturn is just 10 hours and 39 minutes, meaning it has 10759.22 Earth days in a year. And in order for it to orbit completely around the Sun, it takes 29.4 earth years.

Another amusing fact about Saturn is that it’s not only home to one moon, like our planet Earth’s, but has 53 confirmed moons with additional 29 more provisional moons that are yet to be confirmed.

7. Its Largest Moon is the Titan

Titan is not only the largest moon of Saturn but is an exceptional world too. Out of all the known moons in our solar system, which is more than 150, Titan is the only moon with a substantial and suitable atmosphere. To add to that, it is the only other planet in the entire solar system where scientists have found traces of water on its surface. There are rivers, oceans, and seas present that are made out of hydrocarbons.
In fact, Saturn is, also, the second-largest moon in the solar system and is even larger than the planet Mercury.

8. The Most Extensive Ring

Saturn’s ring system is the most extensive and complex in our solar system. It horizontally extends up to 175,000 miles (282,000 kilometers) and vertically extends up to 30 feet. According to factretriever.com, traveling this much distance would reach you more than halfway to the moon from Earth. Although the rings are wide, their width is extremely thin- around 100 yards in thickness.

9. Saturn’s rings are Not Solid

The rings are made up of chunks of ice, rocks, and dust. It is supposed that these were bits of the shattered moon, asteroids, or comets that were further shattered when they reached the planet due to its strong force of gravity.

As intriguing as it sounds, the rings of Saturn have 7 divisions that are named in alphabetical order according to when they were found. They are the A, B, C, D, E, F, and G moons. Furthermore, the ‘Cassini Division’, present due to the gravitational pull of Saturn’s moon called Mimas, is the major division that divides the rings A and B and the whole ring system into two divisions.

11. Saturn has been visited 4 times by Spacecraft

In 1979, pioneer 11 flew approximately 20000 km close to Saturn. Then in the 1980s, Voyager 1 and 2 too flew by and photographed Saturn. However, these were very brief visits. The Cassini spacecraft was the first spacecraft to properly explore Saturn- it orbited more than 70 times around Saturn. When Huygens’s probe descended into Titan’s atmosphere, it was able to further gain information about the atmosphere and surface.

12. Saturn is the Flattest Planet in the Solar System

The equatorial diameter of Saturn is 90%, making it the flattest planet in the entire solar system. This is due to its extremely low density and high speed of rotation.

13. Saturn Has the Fastest Wind

The wind speed of Saturn is approximately 1,800 km per hour near its equator. Due to its high speed and the heat rising from Saturn’s core, yellow and gold bands are visible in Saturn’s atmosphere.

14. The day Saturday was named after Saturn

The day Saturday was named after the planet Saturn and the roman God of farming too.