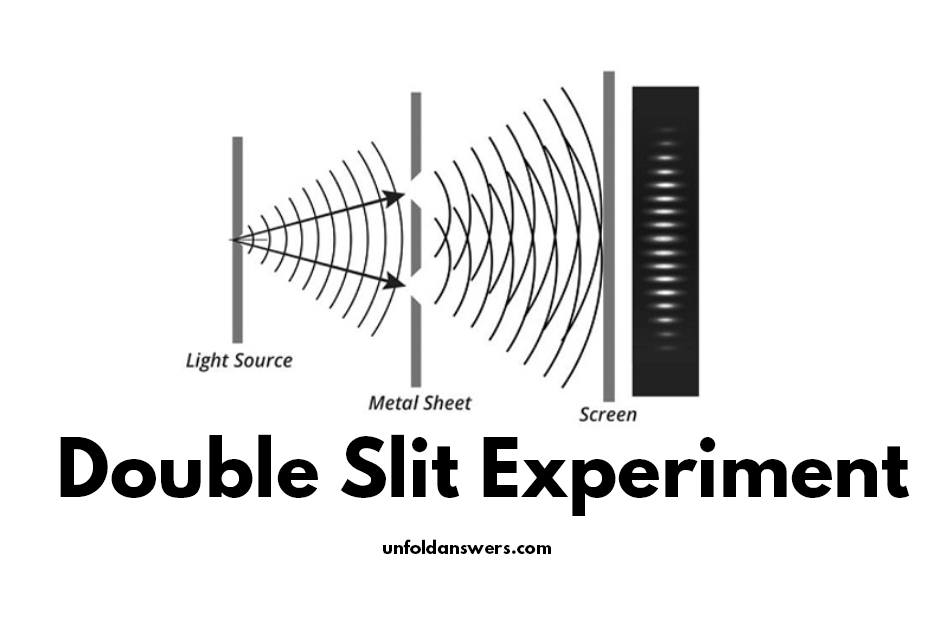 What is a double slit experiment?

A double slit experiment is an interference experiment. Interference is redistribution of energy that occurs when two similar (coherent, frequency and wavelength same) waves are projected on a screen. This redistribution of energy (intensity) results alternative bright (maximum intensity) and dark (minimum intensity) patterns on the screen. This is a well known phenomena that occurs in waves. In the figure given below, S1 and S2 act as two coherent sources and you can see there are alternative bright and dark patches resulted by wave nature of light.

Wave is propagation of disturbance. It disturbs a medium and the disturbance is transferred as ripples of water, high on some region (crest/trough) whereas no disturbance in some region. For a single visible light wave for instance, these variations take place in scale of 10 millionth fraction of a meter i.e. wavelength of a visible light. So, it does not create observable effect.

But, if we have two coherent waves, they interfere the intensity of each other at a point. Hence the point at which crest and crest or trough and trough of two waves meet, we get bright patch and the point at which crest of a wave meets trough of the other, we get dark patch. Mathematically, these bright and dark patterns occur in accordance to the phase difference between two light waves coming from S1 and S2. You can find a fine mathematical approach here.

If we are to conduct this same experiment with matter, grains of sand for instant and the slit being large enough, we would have something like in the figure below. The grains are deposited in two heaps. But if we use smaller things, matter like electrons, the result won’t be the same. This is where things get weird.

When electrons are passed through the slits, our common sense suggests that the electrons should be piled up as the grains of sand did. But, it does not. We would see patterns of depositions as we saw for the waves. Even we send the electrons one by one, the result is still the same. This does not make sense at all, does it?

This happens because, according to quantum mechanics, particles behave as wave and wave also behave as particle. Particles spread out like a wave and this feature is more evident for smaller particles like electrons. The wavelength associated with a particle, called De Broglie wavelength can be mathematically calculated as Planck constant divided by momentum of particle.

These matter waves are observed in various experiments as double slit experiment here. This observation of matters lead us to the central mystery of quantum mechanics, the spreading out of particles which seems so solid and localized to us.

Double slit experiment of matter with a detector

Now that we know particle behave as wave, we are going to the very heart of quantum mechanics, the question of reality itself through the help of this double slit experiment.

Previously we analyzed the result of using electrons instead of light in the double slit experiment but now let us project electrons one at a time and use a detector in a slit to know through which slit the electron passes. If we observe the result in this case, the result is as of sand, we get electrons in two places. Again if we switch off the detector, the result is like of light wave, patterns of electrons.

How can switching a detector possibly change the outcomes of our measurement? It seems like the electrons are as if conscious of our observation and too shy to behave as wave. This problem is known as the observer effect in quantum mechanics.

“The act of observation affects the observed.” It can be well explained in this scenario of double slit experiment. The quantum particles such as electrons behave as a wave when we are not looking at it so that it can be represented as a wave instead of a localized particle. If we look at it, we make the observation and the electron takes a stand behaving as a localized particle. This is the central mystery of quantum mechanics.

The duality of quantum particle results in such effect. A matter behaves as wave too, so it can be represented by a wave function representing a wide range of values of energy and other associated variables, instead of particle with fixed energy, momentum and position. The act of measurement collapses the wave function to a single value of energy and momentum.

So, while the particle is going through a slit say S1, it is spread out as a wave like a ripple in water. It has higher probability of being somewhere and lower but finite probability in the other. So, these patterns of fringes are seen in terms of probability distribution. Again, our act of observation makes the wave function collapse and gives us a localized result without interference pattern when the detector is on.

Now, this explains that our observations can disturb the observed and conceal the reality itself. So, the reality of a quantum world is mathematical and well depicted when not observed. This is how this simple experiment explains the sophisticated commonsense defying science and questions reality itself.