The pace of research and discovery may have dropped due to COVID-19 but still, discoveries are being made and August 2020 was not different. Here is the monthly science news of August 2020. 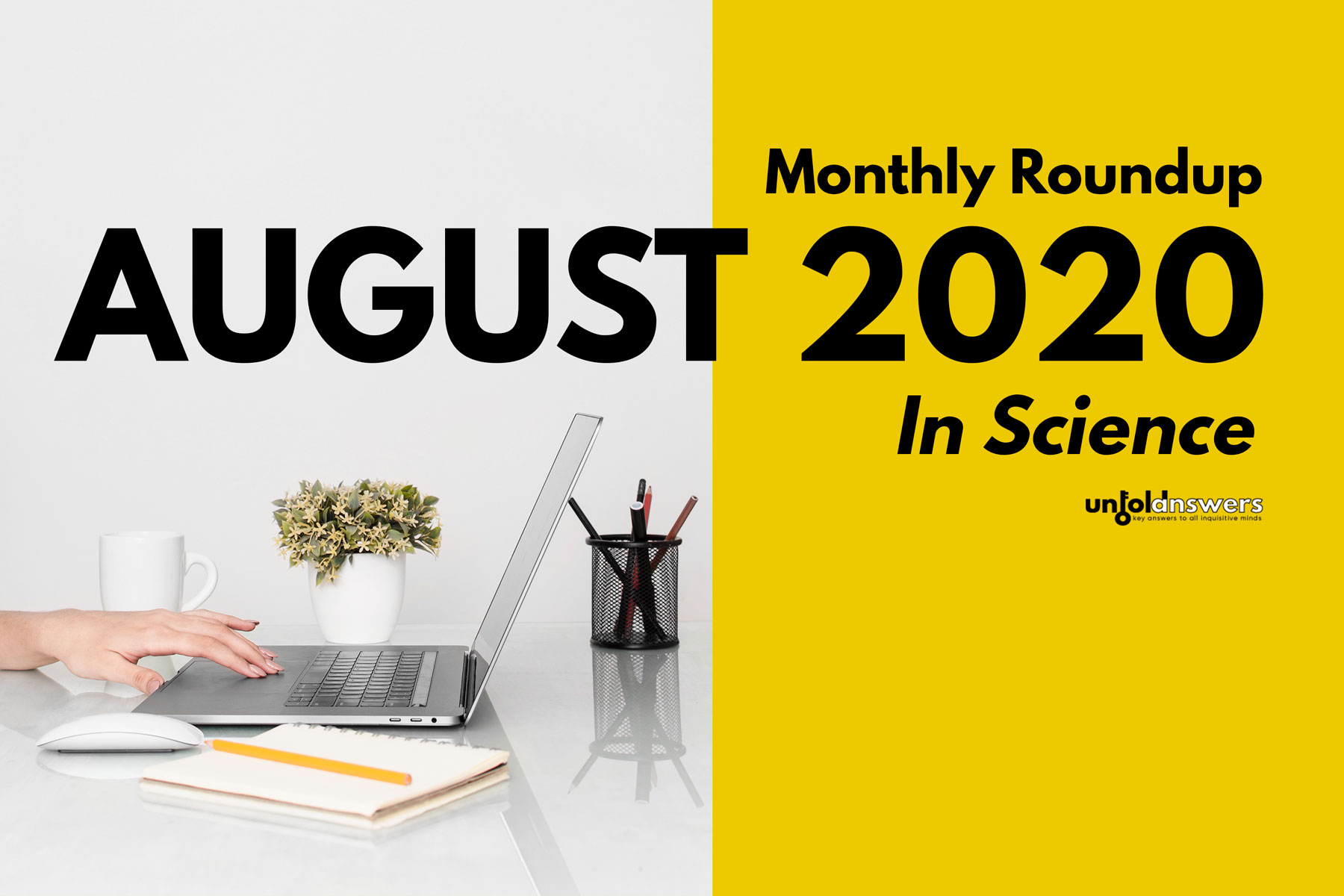 Testing is the major weapon in this fight against COVID19. Testing assures the safety of people from the virus by detecting the ones who have it. But, even in a country like the United States, the average waiting time for COVID19 test results is 4.1 days.

Although there has been development in other rapid testing, the accuracy of those tests remained the major problem. However, Abbott’s new testing called Binaxnow can reduce the testing time to 15 minutes, with highly accurate results. Not just speed, the cost reduction is also alluring since the cost of each test is only $5 on the contrary to the present tests which have cost as high as $100 per test. –Source

The quantum world has always amazed us. Things get weirder but still scientists were able to make theoretical predictions about this magnificent world. But, Physicists at University College London have discovered a discrepancy in theory and experiment which can further refine the theory of quantum electrodynamics (QED).

In a study done in an exotic atom, called positronium (a particle which is a bound form of electron and its anti-particle counterpart, positron), the transition frequency calculated was off the theoretical value by 4.5 times the combined experimental and theoretical errors. This discrepancy suggests that QED lacks something but it has been the most accurate theory till date and so scientists have been skeptical about this experiment. But, if correct, it will refine and upgrade our knowledge to a whole new level. –Source

3. Advance in conversion of atmospheric Carbon to usable forms

Increasing Carbon dioxide emissions have taken a lead role in aiding global warming. A green approach to reducing such carbon in usable forms can open a new avenue towards an environmental friendly future.

Researchers at Oregon State University have made a key advance in the conversion of atmospheric Carbon to usable form via electrochemical reduction. A new type of catalyst developed by the team can selectively promote the reduction from Carbon dioxide to carbon monoxide, which was chosen in their research. This research can aid the development of a negative-carbon economy in coming future. –Source

4. Landmark study of halo around Andromeda by Hubble

Galactic halos are gases that envelop a galaxy. It is fuel for newly forming stars in a galaxy, so they are a key to the past as well as the future of a galaxy. Due to this, scientists are always making attempts to study these reservoirs of gases.

Scientists have mapped the halo surrounding Andromeda galaxy using Hubble Space Telescope and found that it extends as much as 2 million light years and is connected to halo of our galaxy, the Milky Way. Since studying the Milky way’s halo is difficult, this study has enabled scientists to gather more comprehensive information about halos related to galaxies and in particular Andromeda galaxy. -Source

The light coming from distant stars might have taken millions of years to reach here, so the picture of the sky is a picture of the past. On the quest to view our distant past, scientists have encountered a very young galaxy named SPT0418-47, just 1.4 billion years after the Big Bang.

Atacama Large Millimetre/sub-millimetre Array (ALMA) has revealed this milky way like a galaxy in terms of its disc and a bulge, though it does not have spiral arms. The major finding is that this galaxy is ordered and stable which is in opposition to the accepted theories which dictates that early galaxies were turbulent and unstable. Further studies will seek more details about it and will enrich our knowledge of the formation of galaxies in the early Universe. -Source

In this time of isolation, scientists are putting more effort into analyzing its effects on people. A team of researchers at Icahn School of Medicine at Mount Sinai has identified specific brain cells responsible for sociability in adulthood and found these cells are vulnerable during childhood in mice.

The researchers also used optogenetics and chemogenitcs to increase social interactions in mice, which ones had sociability deficits. If these results can be replicated in humans, it can be a milestone achievement in the treatment of various mental disorders like autism and schizophernia. –Source

Dogs have amazing power of smell. They can and have been trained to sniff various diseases like diabetes, malaria and tuberculosis. Due to this, researchers might have put a thought on training dogs to detect COVID19 patients.

A research led by University of Veterinary Medicine, Hannover, suggests that pups can be trained to detect COVID19. They trained dogs making them sniff saliva samples and swabs from COVID19 infected and healthy people for a week. Such trained dogs were able to detect samples with 94% accuracy from 1,012 randomized samples. –Source

8. Mystery of brightness of Ceres solved

Ceres, a dwarf planet that lies in Asteroid belt between Mars and Jupiter has several mysterious bright spots. These spots had not yet been studied up closely but the recent views from NASA’s dawn spacecraft has given information solving the mystery of those bright spots.

According to the finding, Ceres has a large reservoir of brine, salt enriched water. The reservoir is about 25 miles deep and hundreds of miles wide. This is the first time ever such pressurized groundwater has been seen in dwarf planets. During the last days of the Dawn mission, it did give a lot of information. –Source