Science has seen an ample amount of advances in October. Here is our monthly round-up science news and updates for October. 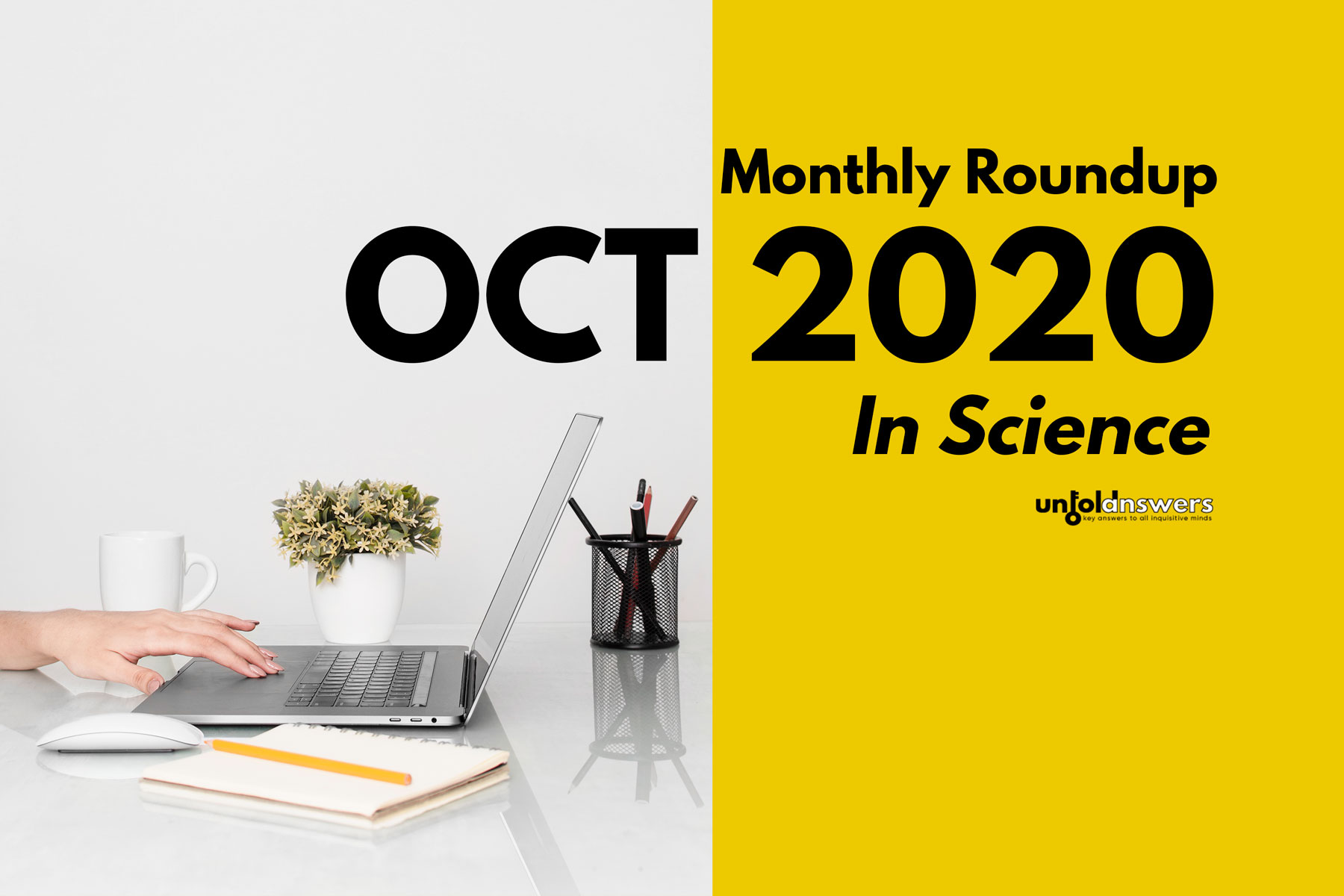 This month Nobel prize was announced. Here are the winners of 2020 Nobel prize in the STEM field.

Nobel prize in Physics 2020 was jointly awarded to Roger Penrose (half) for the discovery that black hole formation is a robust prediction of the general theory of relativity, Reinhard Genzel (one fourth) and Andrea Ghez (One fourth) for the discovery of a supermassive compact object at the centre of our galaxy. – Source

Nobel prize in Chemistry 2020 was awarded to Emmanuelle Charpentier and Jennifer A. Doudna for the development of genome editing called the CRISPR/Cas9. This technology has revolutionized life science and has been humanity’s greatest weapon against numerous diseases. – Source

Nobel prize in Chemistry 2020 was awarded to Harvey J. Alter, Michael Houghton and Charles M. Rice for the discovery of the Hepatitis C virus. This has been a crucial discovery saving numerous lives worldwide. – Source

Superconductivity is an amazing property of materials which can enable materials to conduct current without any loss. Also, it enables materials to have astounding property as flux pinning, which is a key property for levitating vehicles.

Scientists at the University of Rochester along with other collaborators have discovered superconducting nature of photochemically transformed carbonaceous Sulphur hydride at a temperature as high as 15 degree Celsius. Although the pressure required for superconductivity thousands of times greater than the standard atmospheric pressure, it is a great achievement. – Source

3. Sunny part of the moon has water – Now confirmed

It was believed that the sunny part of the moon might have water. But, due to the lack of a clear distinction between the spectral lines from a water molecule and other hydroxyl compounds, there was no confirmation at all. Recently scientists have discovered a clear signature of water from the lunar surface using the data of DLR Stratospheric Observatory for Infrared Astronomy (SOFIA). The water may have been protected in several forms despite the harsh climatic conditions. – Source

Dark matter comprises nearly 90% of the total matter of the Universe. However, its detection is not possible using the present technology. But scientists can predict the amount of dark matter in a galaxy by tracing the movement of surrounding galaxies. In the case of Milky Way, Scientists have been observing the path of Sagittarius and tried to calculate the shape of Milky way’s dark matter. Studying the status of our galaxy, Sagittarius and Large Magellanic Cloud millions of years ago, scientists were able to infer the shape of Milky way’s dark matter. – Source

5. A catalyst that can breakdown plastics as if by natural processes

We use plastics widely and we know that they are non-biodegradable and cause land pollution. They have created a massive problem in the modern world. People may dictate that plastics may be recycled and can be used again and again but this is not good in terms of the quality of plastics.

Scientists at Ames Laboratory have now developed a process in which a catalyst can break down polymers into shorter chains as the microbes and enzymes break the protein and cellulose. This is a major step towards the reduction of environmental pollution caused by plastics. – Source

6. Cryo-electron microscopy at the atomic level

Observation is the key to findings and studies. Microscopy is hence a vital tool for the study of the molecular world. For instance, if you want to study the structure of proteins, you can bombard electrons on it and obtain an image. This imaging has recently reached the resolution of the atomic level. This means we can know the positions of individual atoms, which will aid the study of proteins. Also, it can be very useful in the analysis of other biological structures which are rigid in nature. – Source

Measuring temperature at the nanoscale can be crucial in the observation of the biological phenomenon. Injecting nanodiamond quantum thermometers, bio-compatible molecular thermoresponsive probes, scientists were able to detect temperatures inside the body of worms in real-time. This method can be useful in the study of thermogenic responses of the biological activities in various living beings. – Source

8. The reason behind strength of tank-like beetle

How strongly do you think insects can be? You might not believe it but a special type of beetle called diabolical ironclad beetle cannot get smashed even if it gets run over by a car. It is like a tiny tank.

The scientists have revealed that exoskeleton of this beetle is a structural marvel and its toughness is accounted for by its jigsaw-like joints and support structures. This structure protects it from the predators as well as being stepped on. These types of tough natural structures can inspire many artificial structures in the coming future. – Source